In October 27, 1966 the Peanut Gang was animated into one of my favorite cartoons, “It’s The Great Pumpkin Charlie Brown”. It’s been 52 years since it debut and now millions of children have watched Charlie Brown muster through Halloween.

It was inevitable that poor Charlie Brown would seem to get the short end of the stick with whatever activity he was involved in. The wonderful writing of Charles Schulz would place this beloved character as the underdog to all his friends.

What I found very interesting was that Charles Schulz was a Christian and would find clever ways of showing viewers his faith. The greatest example would be found in “A Charlie Brown Christmas” where Linus reads the birth of Jesus from the book of Luke in the Bible.

The network had given Charles Schulz a very hard time in allowing any biblical references in this low budget animated special, however, Charles wouldn’t budge and the network gave in.

In all his comic strips and animated specials one can find the hidden messages of hope, Joy, forgiveness and acceptance. It was his way to preach to a broken world.

Now, it was easy to find God in a Christmas special, but his next special was Halloween. This controversial holiday has many Christians divided on God’s participation in it at all. 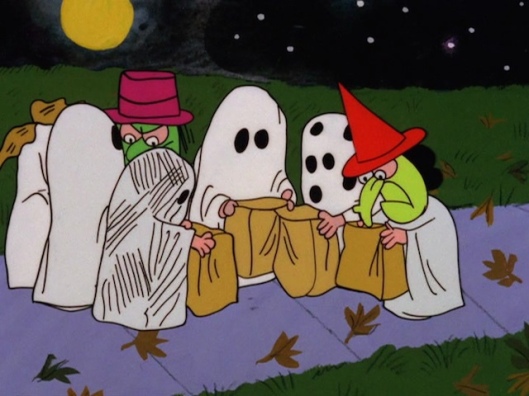 I was having a conversation with a friend just a few days ago sharing about my childhood. It was filled with wonderful memories of trick or treating. The natural flow of reminiscing brought Charlie Brown’s Halloween to my full attention.

I saw the scene so vividly playing in the memories of my youth. The Peanut gang was trick or treating and afterward would immediately run to see what each person got. The voices sprang up as the scene played in my head, “I got a chocolate bar”, “I got a piece of gum”, “I got a popcorn ball” and then Charlie Brown uttered 4 words, “I got a rock”! Poor Charlie Brown …or so I thought.

That scene quickly was a teaching moment for me because God was going to reveal His presence in the cartoon!

We could look at Charlie Brown actually getting the best treat of all. He was getting something he could stand on and cling to.

We all can feel like we have had a Charlie Brown season in our life. The one left out, the brunt of jokes, the failure, the mistake, the disappointment, the useless, the one not honored or not valued. God sees it all and He has a way of speaking to us.

If we look at the scene differently, then we can hear, “I got a lollipop”, “I got cookies” and Charlie Brown saying, “I got a ROCK”- my God is my rock, in whom I take refuge, my shield and the horn of my salvation. He is my stronghold, my refuge and my savior— from violent people you save me.” 2 Samuel‬ ‭22:3‬ ‭NIV

At the next house, the kids excitedly shared what they got again “I got a candy bar”, “I got candy corn” and Charlie Brown shares, “I got a ROCK”- “Truly he is my rock and my salvation; he is my fortress, I will never be shaken.” Psalm 62:2

Each time and at each house God used a rock to send a message to Charlie Brown. Funny that he never cried, never got angry or never felt bad. Charlie Brown accepted each rock as what was chosen for him.

We have that same opportunity to speak life into every person we encounter. It’s up to us to love on a broken world. Maybe we can learn from Charlie Brown and share the gifts we have been given.